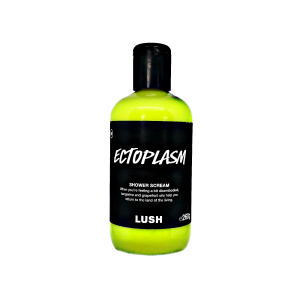 After yet another Lush Halloween line without my beloved Calacas shower gel there was a lot riding on the shoulders of the brand new Ectoplasm Shower Cream ‘Scream’. Sharing its name with the Ectoplasm jelly bomb I was very excited to give it a try. The first thing anyone notices about the Ectoplasm shower cream is definitely its shade of colour, its fluorescent yellow formula demands to be seen.

When I smell the shower cream straight from the bottle, I feel as if its scent is more tropical than that of the jelly bomb, I feel like there’s almost a pineapple element to it. I’d actually go as far as to say that I prefer the Ectoplasm scent in the shower cream format, it’s a beautifully haunting fruity affair. 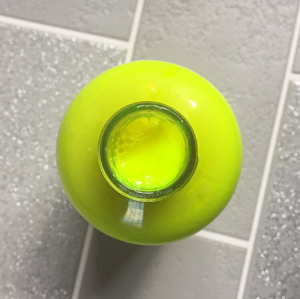 Consistency wise the Ectoplasm shower cream is gloriously creamy-thick. It is however very easy to get out of the bottle, while also not being so runny that you accidentally get out a little too much prior to its use.

Once the steam of the hot shower blends with the Ectoplasm shower cream its scent really takes hold. Its gentle zest packs a subtle sharpness, just the right amount of lemony-freshness to help lift and refresh your spirits.

Although I found that the Ectoplasm shower cream wasn’t great at making much of a lather it did still leave my skin feeling refreshed, clean and delicately scented. A little amount of it goes a long way and with its wonderfully inviting scent it’s very easy to over indulge on. 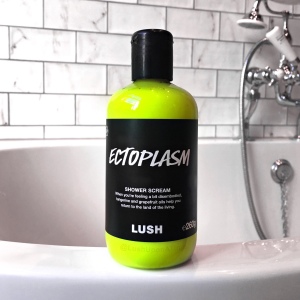 As said above, a small amount of the shower cream goes a very long way. I found a 2p-coin-sized amount more than enough to spread out and use on the whole of my body.

Overall I am very pleased to add the Ectoplasm shower cream to my shelf of Lush shower gel and creams, I wasn’t expecting to like it quite as much as I do which has come as a pleasant surprise. It’s actually the first seasonal shower gel that I’ve bought more than one bottle of in a very long time, I definitely recommend grabbing a bottle before the Halloween season is over. 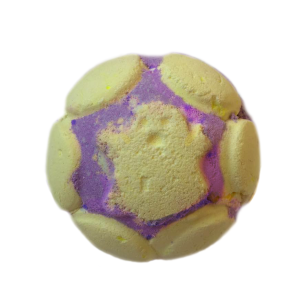 The Ectoplasm Jelly Bomb was the last of the Summit 2017 products that I really wanted but have only just now got hold of. Since the Summit it has had a slight update, it now has a ghost shape on it much like all of the other brand new jelly bombs’ unique mascots, for example Snow Fairy has a star and Dark Arts has an eye.

As far as I am aware the Ectoplasm was the first of the jelly bombs to be finalised and released (albeit at the Summit). With it only being available for one day out of the 2 Lush-Summit-days, it meant that only a small handful of people had the privilege of trying it. Therefore when the aforementioned Dark Arts alongside the Marmalade, Green Coconut and The Big Sleep jelly bombs were released earlier this year the Lush world wondered where Ectoplasm had gone.

The second time Ectoplasm became available was via the Lush Kitchen a few weeks back, although nothing has been confirmed I suspect it will become available everywhere for Halloween 2017. 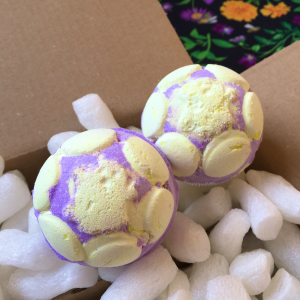 Ectoplasm contains tangerine, grapefruit and litsea cubeba oil (an ingredient that was unfamiliar to me), at first I was a little puzzled as when sniffing Ectoplasm I could only really make out a lemon scent, after having a quick look at its ingredients I worked out that this is because of the litsea cubeba oil.

Ectoplasm’s scent is a very gentle zest and packs a subtle sharpness, just the right amount of lemony-freshness to help lift and refresh your spirits. 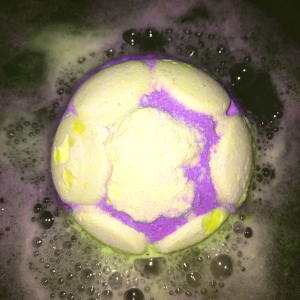 Upon hitting the water the Ectoplasm jelly bomb begins to bob around hissing out a burst of fluorescent green colour, the bubbles fizzing out of it are at first purple tinted but slowly turn the same green. Its green and purple colouring reminds me of the old version of the Northern Lights bath bomb. The bubbles merge together on the surface of the water and slowly froth into a thin layer of jelly. I use the word ‘jelly’ loseley as it’s not gooey at all, it’s more of a silky luminous froth.

Upon first use I was a little disappointed that the Ectoplasm didn’t produce more ‘jelly’, after all it is a jelly bomb. I have since tried it again though and on the other occasions it did have more jelly, therefore I advise that it’s worth giving Ectoplasm a few goes before you decide if you like it or not.

I suspect the ghost motif was inspired by the colour of the jelly, if you’ve ever seen the 80’s movie Ghostbusters then you’d know exactly what I mean! 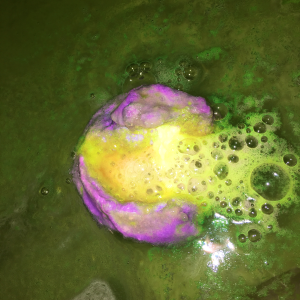 It much like the Snow Fairy jelly bomb took a while to dissolve. Some of it was in fact still floating around when I needed to get out. I recommend trying the jelly bombs with as hot as you can stand it water, just like the Butterball bath bomb it performs better the hotter the water.

Pushing the leftover lumps aide, everything else about this jelly bomb ticks my boxes for a good Lush product. Once you’re out of an Ectoplasm bath your skin feels fabulous, I’ve said it before and I will say it again, the effect the seaweed based sodium alginate ingredient has on your skin (the ingredient that creates the jelly like substance) is like nothing I have experienced in a cosmetic product before. The Lush jelly bombs are a game changer in regards to skincare, even after a day has passed, your skin still feels soft, smooth and fabulous after sharing a bath with a jelly bomb.

Ectoplasm’s scent stays with you throughout your bath. Once you get out it remains on your skin for a few hours too. Before I forget, I want to point out that the jelly it creates dissolves into just bath water after a short time, I have mentioned it as this is a question everyone keeps asking me. Overall I am very impressed with this jelly bomb, I have my fingers crossed that it is a part of the Halloween range this year and that hopefully by then they may have improved the recipe in some way so that we don’t get as many lumps hanging around at the end.