For Christmas 2018 Lush created 3 different Bomb Bombs; The Snowman, Santa and the Princess Bomb Bomb. The idea behind the bomb bomb is that you get 2 bath bombs in one character. One of the bath bombs is its head the other is its body, hence the ‘bomb bomb’.

Being honest as always, I will just come out and say what everyone else is thinking, this bath bomb won’t be winning any prizes for its looks anytime soon. Out of the 3 bomb bombs from 2018, Princess is by far the strangest to look at. As I have said in my other bomb bomb reviews, I feel as if all 3 of them were thrown together at the very last minute and I stand by my statement that each of them are just novelty products.

The Princess Bomb Bomb has a pink dress, a green face, an orange crown, yellow hair and 2 big vegan candy eyes. I hate to sound like a broken-record but Lush really could have done so much better with this bomb bombs design. The bomb bomb is such a good idea and concept, the only problem I have is that all I see when I look at the Princess Bomb Bomb is a frog in fancy dress! – I normally find some sort of charm in this type of ‘ugly’ Lush product, Princess is however an entity.

The Princess Bomb Bomb contains bergamot, cedarwood and ylang ylang oil. I was taken by surprise with this line up of ingredients. Due to its bright and mainly pink colouring I automatically assumed that the Princess Bomb Bomb would share its scent with the Snow Fairy shower gel. Yet again I was wrong. 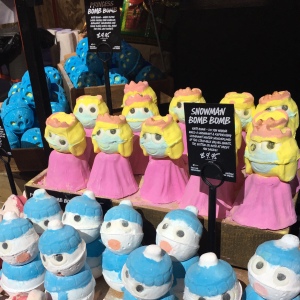 Its scent is so far from what myself and the rest of the Lush community were expecting when the 3 bomb bombs were announced. It has sweet, subtle and musky floral elements to it and in my opinion is definitely a scent that would appeal to the older members of the Lush community in particular.

As soon as the Princess Bomb Bomb comes into contact with the bath water it begins to hiss. Yellow and pink bubbles fizzle out of it and spread across the waters surface. Just like the other bomb bombs, Princess dissolves fast, so fast that I didn’t manage to get any half -decent photographs of it in action.

I didn’t fall head over heels in love with the Princess Bomb Bomb for all of the reasons I have mentioned above. I do however hope that Lush use its scent in a future product as it is one that my nose rather enjoyed!