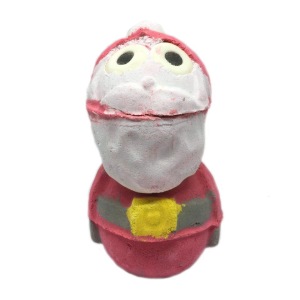 Being honest as always I admit that I have left the reviews of the 3 different ‘bomb bomb’ bath bombs until last as I see them as just a novelty product. I’m just going to say what everyone else is thinking, this bath bomb won’t be winning any prizes for its looks anytime soon. I feel as if all of the bomb bombs this year were rushed, last minute products, they could have done so much better with all of their designs.

This Winter Lush created 3 different Bomb Bombs. The idea behind them is that you get 2 bath bombs in one character. One of the bath bombs is its head the other is its body, hence the ‘bomb bomb’. 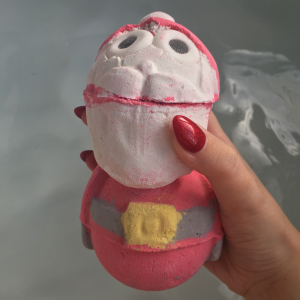 Ingredients wise the Santa Bomb Bomb has a little more to offer than the  Snowman Bomb Bomb.

The Santa Bomb Bomb contains both vanilla and cocoa absolute as well as bergamot oil. I couldn’t however understand why Lush were describing this bomb bomb as having a ‘chocolatey-sweet and uplifting scent’. To me in the shop it just smelt bland and as if the ingredients were all thrown in together at the very last minute.

This rushed assumption of mine was however undermined once I’d placed the Santa Bomb Bomb in my bath water. I used both the head and the body together, some people have however spread their bomb bombs out over 2 baths, one day using the head and another day using its body. 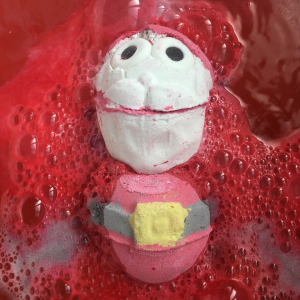 As soon as the Santa Bomb Bomb is placed in the water it begins to hiss, deep red bubbles explode across the waters surface. I wasn’t expecting the colour to be so intensely red. Even once the bath bomb had fully dissolved into the water the intensity of the red never faded. Unfortunately the Santa Bomb Bomb much like the Snowman was a very fast fizzer.

Considering I used both of the bath bombs together I was rather disappointed at how quickly they both disappeared. Some people do enjoy the fast fizzing bath bombs though as it means they can sit back and relax sooner.

What I wasn’t expecting from the Santa Bomb Bomb was its scent, it seemed to completely change once placed in the water. I could smell elements of the Butterball bath bomb in it which my nose approved of. A scent I wasn’t at all sure about at first actually turned out to be very nice!

Overall I think the Santa Bomb Bomb bath bomb was the best of the 3. I was really surprised by this as I honestly thought this one would be my least favourite of them all. 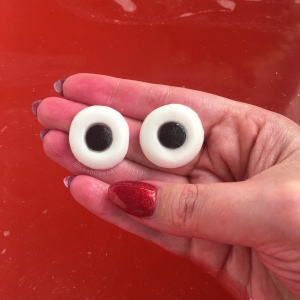 Although its scent was bland when in my hand, once in the water it really came to life. Its scent however seemed to fade within about 10 minutes (way before I pulled the plug.) Nevertheless a half hour soak in its waters did leave my skin feeling soft and well nourished.

There’s a little bit of me that still thinks I’d have much rather spent my money on 2 completely different Lush Christmas bath bombs such as the Christmas Sweater and Mistletoe. Or if Lush could have even made the head and bodies different scents so that more people would use them as 2 separate bath bombs?

The bomb bombs are a cute idea, I just think instead of the 3 bomb bombs released this year we could have actually been offered 6 individual bath bombs instead, widening the choice while also keeping long term Lushie’s happy with retro products that we haven’t been able to get hold of since the closing of the weekly Lush Kitchen. I won’t be sad if this bath bomb doesn’t make a return next year, I am however glad I got to try it.