If like me you thought that we had seen the last of the ‘bomb bombs’ when 2018’s Winter line retired then you were wrong. Very, very wrong. 2 brand new bomb bombs have made an appearance for Lush’s Spring 2019’s line and being honest as always, I actually think that they are both much easier on the eye than the original three, dare I say the Lamb Bomb Bomb Bath Bomb is in fact quite cute…

The idea behind the Lush bomb bombs is that you get 2 bath bombs in one. One of the bath bombs is its head the other is its body, hence the ‘bomb bomb’. Ingredients wise the Lamb Bomb Bomb contains peppermint oil and chocolatey cocoa absolute, its scent is very similar if not the same as the Thundersnow bath bomb that came out a few Winters ago. A scent I have always enjoyed as it reminds me of a yummy mint chocolate desert!

I decided to use the head and body of the Lamb Bomb Bomb in just the one bath (see below photos) some people however spread their bomb bombs out over 2 baths, one day using the head and another day using its body. There’s no right or wrong way to use it, the choice is entirely yours.

As soon as the Lamb Bomb Bomb hits the bath water a burst of white and blue foam fizzles out of it. Much like the aforementioned bath bomb Thundersnow, Lamb Bomb Bomb creates quite a creamy-thick layer of foam that floats on the water surface. It actually reminds me of a jelly bath bomb ever so slightly, the foam doesn’t however last as long as jelly and slowly fizzles itself away into the bath water, it’s just like a squirt of cream that slowly melts into your cup of hot chocolate. 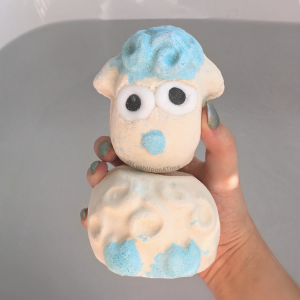 Once the Lamb Bomb Bomb has fully dissolved you are left with silky smooth, very light, creamy blue (almost white) bath water. I found the waters incredibly moisturising, it was nice to use a bath bomb that was this moisturising without chunks of oily butter in it like the Yog Nog bath bomb.

Lamb Bomb Bombs basic and very gentle list of ingredients left my skin fabulously hydrated and soft, I was very impressed and have since used another Lamb Bomb Bomb’s head and body separately (in 2 different baths) and my skin was left just as satisfyingly smooth to the touch. 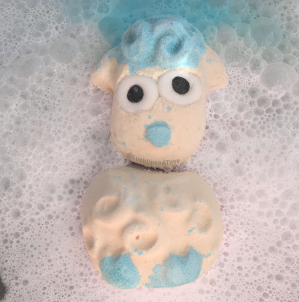 Just like the Princess, Snowman and Santa Bomb Bomb‘s the vegan friendly, candy eyes are the last part of the bath bomb to melt away; Which might I add is just as creepy as it is charming. As a matter of fact, I actually really enjoyed using the Lamb Bomb Bomb bath bomb, I have warmed to the bomb bombs ever so slightly thanks to this ones design, it doesn’t look like it was all thrown together at the very last minute like the aforementioned bomb bombs released before it.

I am actually quite looking forward to reviewing the next bomb bomb after writing this review. It’s always double the pleasure when you love a bath bomb that you thought you wouldn’t like very much at all. Although we have the store-staple Intergalactic bath bomb when we fancy a bit of cooling peppermint, Lamb Bomb Bomb made a very nice minty infused change!