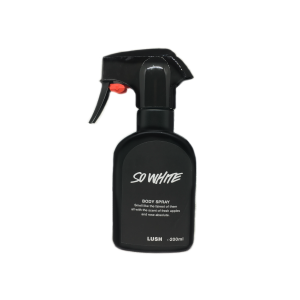 At the time of writing this review the So White Body Spray is currently an exclusive Lush product that can only be purchased through the Lush Kitchen online. If you have been thinking of getting a bottle I suggest placing your order sooner rather than later, they have proven very popular and even though the Lush Kitchen are making much bigger batches now, I can’t see them being around for very much longer. The So White body spray shares its scent with Santa’s Belly shower jelly, Once Upon A Time body lotion and of course the So White bath bomb and shower gel.

This deliciously-crisp, apple scented body spray is the perfect product to spritz yourself with to leave you feeling instantly refreshed, its scent is uplifting and gives you the boost of all boosts to help start your day with a clear state of mind. I can never resist its scent, there’s just something about it that makes me think of a far away, fairytale kingdom. Smelling just like a princess has never been so easy!

To use all you have to do is squirt the So White body spray over your body or clothes. Just 1 or 2 squirts is all you need, I’m amazed that such a small amount leaves you smelling absolutely gorgeous all day long. Now that I own a few, I can understand why so many people favour the body sprays over the perfumes. They have the same level of strength (scent-wise) and you get so much more for your money with them too. 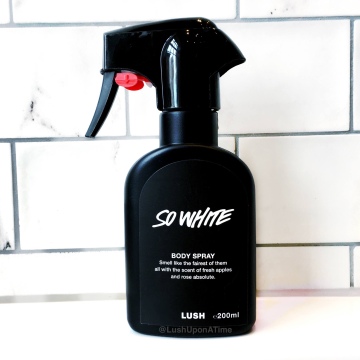 As I said above, only one or two spritz of the So White body spray is needed to get the most out of it and its scent really does stay with you for the whole day. Upon the very first spritz I immediately ordered another bottle of it, it was still available and I thought, why not? I never, ever want to be without this beautiful, fairytale-dream-scented body spray. I am gutted that it was released after my wedding as it would have been the perfect scent for our special day. Not that my wedding wasn’t amazing but smelling just like a princess would have made the day glisten instead of just shine!

I honestly don’t know why Lush didn’t create more body sprays long before now as they really are such wonderful products. They are so cost effective and last for so much longer than any other Lush product ever has before. In my review of the Twilight body spray I said that it was the best body spray I had ever tried, well… Move over Twilight, So White is in the house.

I am so pleased that the Lush Kitchen expanded upon the line of products with the So White scent, I have been a huge fan of the scent family ever since using my very first So White scented Lush product, the original So White bath bomb. Apple scents aren’t a common ingredient in Lush products, the only other product with a hint of apple in that springs to mind right now is the Fizzbanger bath bomb. Fizzbanger smells just like hot, apple pie, it’s yet another Lush-applesque-scent that I adore, Fruity apple scents must be in demand though as Lush also do a Fizzbanger scented body spray called the Love body spray… Here’s hoping even more So White scented products get invented. I have my eyes peeled for that So White solid perfume that the Lush Kitchen promised us!

The So White scent is by far one of my favourite fragrances from Lush’s winter line. There aren’t many products that have its scent but the ones that do are all more than perfect in my eyes.

The So White scent reminds me of fresh, crisp apples. I love how refreshing it is, it always lifts me from a bad mood. It fills my bathroom with the most beautiful and fairytale-like scent, every time I use it I always find myself thinking of  the scene in Snow White where the Evil Queen gives Snow a cursed apple… 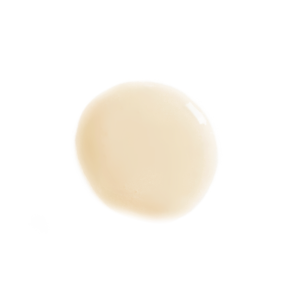 The So White Shower Gel which I will be reviewing today is probably one of my favourite products from the So White scent family.

The shower gel’s consistency is quite runny, I always recommend giving it a good shake before using it. Once it has been shaken it works beautifully. A little of the shower gel goes a very long way, I love it as a shower gel, it lathers up really quickly and brightens, cleanses and hydrates my skin into tip-top condition.

I actually even use it as shampoo too. They say not to use shower gels on your hair very often as obviously it’s not shampoo, I however sometimes use So White shower gel in my hair because I love the scent so much. It is actually very good on my fine hair. It is such a light formula and the scent stays in my hair right up until I wash it again.

Overall I love the So White shower gel, I think maybe it could be improved ever so slightly if they maybe turned it into a shower cream, much like they did this year (2016) with the Prince Charming and Yummy Mummy shower creams.

There’s just something about shower creams that feel that little bit more luxurious than a shower gel.

By all means I love it as a shower gel, my inner Lushie however very much desires to try the So White scent in other formats as I know they’d all be products to die for! 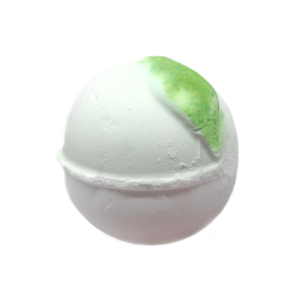 When I see that the So White Bath Bomb had, had a makeover I was a little worried as the older version is one of my all time favourites. When presented with the new So White I was relieved to find that its scent remained the same as the original.

The new So White bath bomb is now shaped more like an actual apple. It has an indentation where the apples stalk would be if it was a real apple and also a single green leaf on its top.

One more difference I could see was that instead of also being completely round, the new So White bath bomb now had one flat side making it more stable if put on display. I’m not sure why some bath bombs have this and others don’t as I’ve never thought to ask.

Above is a picture of the new So White bath bomb next to its older design. When I got home and compared both of the designs together I noticed that the newer one also felt a little lighter. The old design had quite a sturdy, solid exterior; One that reminds me of a gob stopper.

The new So White however has a much softer and almost dusty shell,  which normally means it is coated with Lush’s foaming agent meaning more froth once in the water!

There was only one way to find out if any more had changed so I put my new So White in the bath, camera at the ready.

It instantly began to foam lots and lots of white. The older version after a few seconds would then start to show its pink exterior. After a minute or so I noticed that there was no pink. It was at that point that the bath bomb began to spin, dunking its one green leaf under the water creating one very small puff of apple green foam.

By this point I was wondering if the bath bomb had a coloured center at all. The older version was pink throughout but the newer design seemed to be white all through. Pink is my favourite colour so I was a little disappointed.

Just as I was about to sit back in the bath thinking that the bath bombs show had already finished the bath bomb suddenly spurted out yellows, blues and greens!

The new colours really did surprise me. When you’re used to a soft pink exterior you really are surprised to see other such vibrant colours appear.

The colours hidden inside the new So White bath bomb are similar to those of the Fizzbanger bath bomb. The introduction of these bright and zesty colours well made up for the absence of its previous pink interior.

The scent of this slow dissolving bath bomb like its older design still allowed my imagination to run wild. The sweet scent of fresh, crisp apples will always be welcome in my bathroom.

After getting out of the bath I could still smell the scent of the So White bath bomb on my skin, the new version was just as good scent wise and my skin felt hydrated and super smooth. 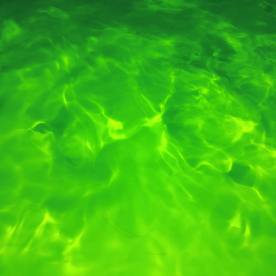 I never think it is possible to improve upon perfection but Lush Cosmetics go above and beyond my expectations of perfection every time. The newly redesigned So White bath bomb is yet another new Lush product that’s going to drain my bank account of funds. Will Lush ever release a product I don’t like?!