The Karma Yantra Bath Bomb started off it’s Lush life as a Lush Spa exclusive, it wasn’t available to purchase and was exclusively used only within the Karma spa treatment. I haven’t been lucky enough to have the Karma treatment yet BUT I have my fingers crossed that I will be able to experience it one day in the not so distant future. 🤞

Back in 2019 Lush released a shed-load of limited edition bath bombs in celebration of 30 years since one of the brains-behind-Lush, invented the bath bomb.

Luckily one of the bath bombs out of the long list of limited edition releases happened to be the Karma Yantra bath bomb; Therefore for a small amount of time, people could buy it and try it outside of the spa treatment!

Karma Yantra’s scent is from the Karma scent family. Karma is a hugely popular fragrance that features in copious amounts of different Lush products, in several different formats.

The Karma Yantra bath bomb has a long list of ingredients, on paper you’d think all of them would never work together but in reality – all of them blended together really work. Each ingredient compliments one another perfectly.

Karma Yantra is a flat, rather large bath bomb. Its size and thickness is very similar to the Skydancer Far From The Madding Guns and Granny Takes A Dip bath bombs. It is a fantastically bold orange colour with raised yellow indents; the yellow indents show a sun-frame-like circle with an equilateral triangle inside; Inside that triangle is another equilateral triangle and so on. 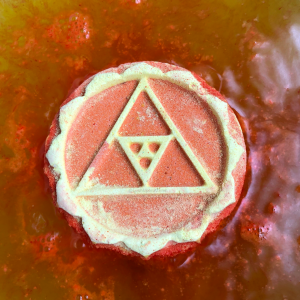 Once placed in to the bath water you are greeted with a hiss of fizzing orange bubbles. With the bath bomb being flat and therefore skinnier than the normal round bath bombs, it doesn’t take very Long to dissolve. It’s not a bath-arty type of bath bomb either, it’s beautifully designed but I think the highlight and main selling point for this bath bomb is its breath-of-fresh-air, welcoming scent.

Overall I really enjoyed using the Karma Yantra bath bomb, my skin felt fabulous after use and the Karma scent remained on my skin well into the next day too.

I hope that I can experience the Karma spa treatment one day. I have my fingers crossed, it’s very high up on my bucket list! 🤞 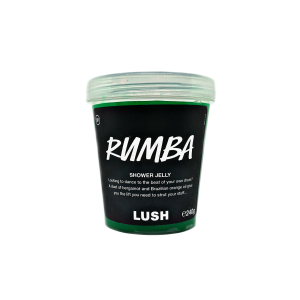 At the time of writing this review, the Rumba Shower Jelly is a Lush product that is exclusively available only at Lush’s brand new, flagship-super-store in Liverpool, England. Sharing its scent with my all time favourite Lush product the So White bath bomb, (the 2016 version with coloured insides being my favourite version) I almost screamed the shop down with excitement after just one sniff.

Yes, we do already get a So White scented shower jelly that never fails to be released year in year out for Lush’s Winter collection the Santa’s Belly shower jelly but Rumba seems to be a much sturdier jelly, plus I love its bright and bold colour.

Rumba is a beautiful shade of green, on its scent, colour and almost indestructible structure (in jelly terms) alone I was left very impressed before I’d even given it a proper go in the shower. 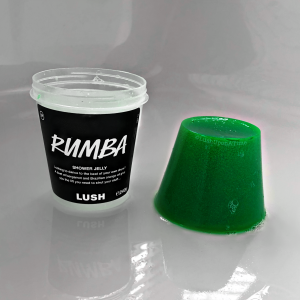 There are so many ways to use a shower jelly, I prefer to use mine in the same way as you would a bar of soap, whole. Some people however chop their shower jellies up using a few pieces at a time. This method is definitely best if you were planning on sharing the jelly (something I never do! 😉)

Most shower jellies I find are fairly robust. There are others such as the Ghost shower jelly that do not last well through use when left as a whole. Rumba is however one of the most robust shower jellies I have used to date. Something I have found is a running trait amongst the jellies that are exclusive to the Liverpool Lush store. 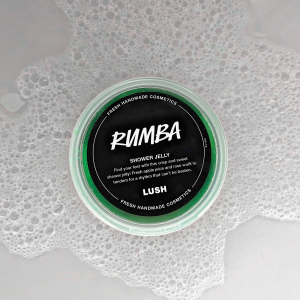 Rumba lathers up quickly and easily, as you work it over your body the steam of the hot water really helps carry its crisp-apple-fragrance around your bathroom. People have asked me if Rumba is as good as the So White shower gel and I have to say it is actually better. As much as I love the So White shower gel and the Santa’s Belly shower jelly, after using Rumba it’s made me realise I prefer the thicker shower gels and/or the sturdier shower jellies.

I have used Rumba several times now and it’s not showing any signs of wear and tear at all, this is something that has really impressed me, with it being such an exclusive product it makes me feel a lot better about using it so frequently, I don’t have to ration it!

After getting out of the shower, the Rumba shower jellies scent lasts for a good few hours on your skin, it isn’t hugely moisturising but a quick splash of Once Upon A Time body lotion (as mentioned earlier it shares the So White scent) sorts out any dryness left without masking its scent with another Lush scent family.