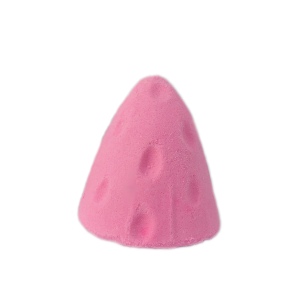 Much to the Lush communities disappointment the Lush’s Mothers Day line hasn’t included one of the most popular shower creams, Yummy Mummy for a couple of years now. For a long time we were spoilt for choice with its scent featuring in a number of the other seasonal products such as the Roller bath bomb and Flutterby bubble bar too and then NOTHING.

Fortunately for us, Lush have finally seen sense and have included a brand new Yummy Mummy scented product in this years (2019) Mother’s Day line, the Strawberry Hill Shower Bomb! Shower Bombs are still a relatively new product invention from Lush and I must say Strawberry Hill has been one of my favourites of the shower bombs yet.

To use a shower bomb all you do is take it into the shower with you and hold it under the water, it will instantly expand and foam up. Lush then advise that you take a deep breath, allow the essential oils to surround you and then begin to cleanse yourself with the foam, just as you would use a shower gel. 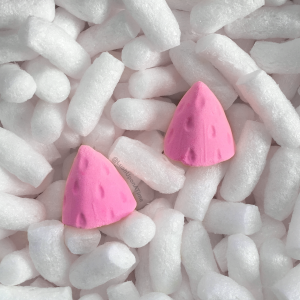 The very first time I used the Strawberry Hill shower bomb I used the whole thing in just one shower. I actually regretted this as there was just so much of it to use, it was never ending, using it as a whole felt very wasteful. There’s over indulgence and then there’s just being silly. I wholeheartedly recommend cutting this shower bomb in half, I’d even go as far as maybe trying to break it into 3 pieces.

As soon as the water touches it, it explodes into a handful of silky smooth bright pink, shower-gel-moose. 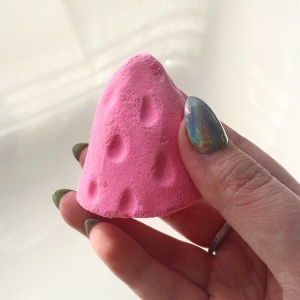 As I mentioned earlier, a small amount of the shower bomb goes a very, very long way. I still have plenty left even when I break the shower bomb into 2 halves. It lathers quickly and is the most like a shower cream or gel that I have experienced while using a Lush shower bomb. Its scent is just as good as that from the Yummy Mummy shower cream.

The best thing about the Strawberry Hill shower bomb was how it not only made my skin feel after use but how its gentle fragrance stayed on my skin hours after getting out of the shower too. With shower bombs being a dry product I never, ever expected them to be quite as moisturising as Strawberry Hill.

As a self confessed pink freak, I knew I’d like this shower bomb as soon as I see it, I wasn’t however expecting to like it as much as I do. I am going to be really sad to see the Strawberry Hill shower bomb leave Lush shops once Mother’s Day is through. It really is the best of the shower bombs that I have had the pleasure of trying from Lush so far. I will most certainly be stocking up on these before it is too late!