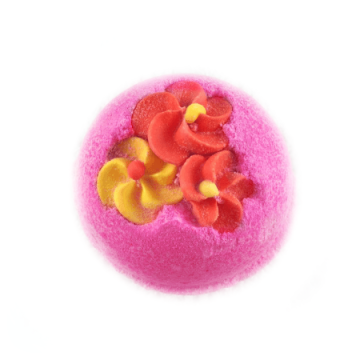 The Think Pink bath bomb might be quite a bit smaller than many of the bath bombs currently available in Lush however do not be fooled. I have said this before and I will say it again, never judge a bath bomb until you’ve given it a go in the bathroom.

This hot pink bath bomb decorated with cute, candy-flowers is quite the sight for a self confessed pink-a-holic. Although I will admit that my nose didn’t at first detect all of its supposed ingredients.

Alongside the vanilla and neroli oil are tonka absolute and lavender. In my head I really  wasn’t sure if all of these ingredients would work well together, I however had a few sniffs of it in the shop and was sold straight away.

Tonka, lavender and neroli oil have since become some of my favourite Lush product ingredients. Ever since I first tried the Think Pink bath bomb I have always made sure that I have one or two to hand for the times I crave a sweet-treat bath.

I adore this bath bombs scent, there isn’t anything much better than being surrounded in Think Pink’s glory, it calms my mind, body and soul. Against my original belief, Think Pink has the perfect combination of ingredients to help me relax and wind down after a long, hard day.

The first time I used Think Pink in the bath I literally had no idea of its surprise ingredient, confetti love hearts! – I know some people are afraid of small and slightly random objects in their bath however these confetti love hearts dissolve away as you bathe, just like the bath bomb did initially. They aren’t scary at all, I promise.

As the description  in the Lush catalogue says, Think Pink really is like a hug in bath form.

Please note that this post was originally posted on this website on the 19th of May 2015, I have updated it several times as with time my photos have become better as has my Lush product knowledge. Thank you for popping by my blog! – Lulu from Lush Upon A Time ♥