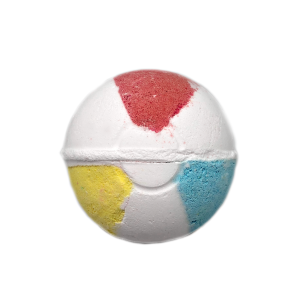 The Peng Bath Bomb started its Lush life as a Harajuku, Japan store exclusive. Stuck in the UK I have never wanted to be able to travel so much before, its design is so unique to any other bath bomb I have seen from Lush before. Designed to look just like a beach ball, the Peng bath bomb screams Summer time fun.

At the time of writing this review the Peng bath bomb is now available from Lush’s UK website and in chosen UK stores; This is however short lived as there are rumours currently circulating that now the 30 years of bath bombs celebration is over, Peng will be leaving planet Lush alongside several other bath bombs into Lush-product-retirement. 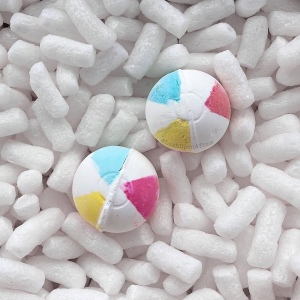 Out of the bath bombs on the rumoured list of bath bombs due to retire, Peng is one of the ones I will be most sad to see go. Containing rosewood, sandalwood and limonene, Peng doesn’t have your typical Summer fragrance, it’s a smoky citrus and floral extravaganza, I really didn’t expect to like it as much as I do…

Whatever you make of Peng’s scent, you can’t argue that it isn’t up on the energising scale alongside the Avobath bath bomb. I know Lush have a lot of zingy, energy-boosting products on offer but Peng made for a welcome change. I love Avobath but with Peng spurting out white, blue, yellow and red foam it made for a much more visibly pleasing bathing experience. 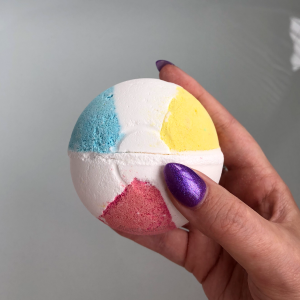 As soon as the Peng bath bomb comes in to contact with the bath water it starts to fiercely fizz away sending white, blue, yellow and red foamy bubbles across the waters surface. The way it dances around the water is oh-so-mesmerising.

As colourful bath bombs go, I was not expecting Peng to be quite as colourful as it was. With it being half white and the other half a 3-way-mix of blue, yellow and red I expected there to only be a little bit of colour at the start of its reaction in the water. I was wrong, very wrong! 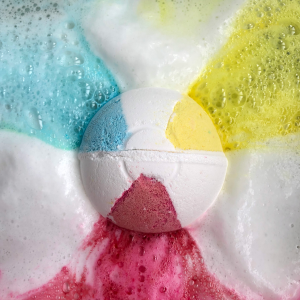 The photos below show just how wrong I was. Bold white, blue, yellow and red foam spin out of Peng, creating beautiful bath art right up until it has fully dissolved. My photos in this post do the bath art Peng creates no justice at all. I strongly advise looking on Instagram under the hashtag, #PengBathBomb for more photos.

Although Peng was a fairly fast fizzer I managed to get quite a few bath art photos of it in action, as I said above my shots do the bath bomb no justice at all, it’s a bath bomb you have to experience for yourself to truly appreciate.

The water left behind at the end was an orangey bronze colour, similar to the likes of the Dragon’s Egg bath bomb.

I know the Peng bath bomb doesn’t look as exciting as the likes of the Experimenter and Intergalactic bath bombs but the less in your face products can often leave you pleasantly surprised.

I am genuinely very sad at the suggestion of Peng not being readily available anymore. I have made a mental note to grab a few the next time I order Lush just in case the rumours are true.

I am happy to declare that I am head over heels in love with the Peng bath bomb. I wouldn’t say it was a particularly hydrating bath bomb skin wise but it didn’t dry my naturally dry skin out anymore. Its scent stays on your skin for several hours after leaving the bath too. I recommend trying Peng before it’s too late!