Lush’s brand new Cinders Shower Gel had me very excited as it supposedly shares its scent with a product of the same name, the Cinders bath bomb. Although I feel it isn’t exactly the same, their scents are close enough to each other to satisfy my nose. The Cinders bath bomb hasn’t been a part of Lush’s Winter line for a good few years now but I haven’t ever forgotten it.

The Cinders shower gel is a gloriously bright orange, it’s a little runnier than I expected but its scent is super similar to the bath bomb. Thanks to its magical cinnamon ingredient, showering with it is like having thousands of tiny hands deeply massaging your tired and aching muscles.

As I said earlier, Cinders shower gel is a little runny, this isn’t a negative point at all. A small amount goes a very long way and I find it also lathers up quickly and with ease, especially when compared to  super-thick shower gel and creams such as Bubbly or Ectoplasm.

My skin feels very clean after using it. Cinnamon isn’t Cinders only magical ingredient either, packed with a generous helping of aloe vera, it is also incredibly hydrating for your skin. Cinders also contains a long list of other warming ingredients such as paprika, ginger powder and nutmeg. Its scent is not as in your face Christmas as the, The Magic of Christmas reusable bubble bar but it’s equally as yummy!

Pumpkin seed oil is also found in Cinders, all of these carefully selected ingredients make for an amazingly stimulating and hydrating shower gel. 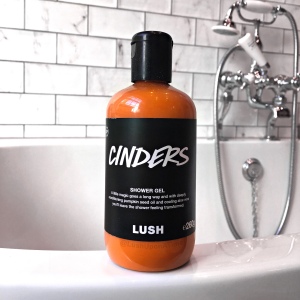 Any Lush product with cinnamon in always has a lasting effect on me. Cinnamon is a wonderful spice, I suffer with chronic pain and it is really good at soothing aching muscles, its warming effects stimulate blood circulation too. Cinders shower gel is a game changer for me. I miss the bath bomb equivalent terribly BUT the shower gel is so much better as it’s not a one trick pony and is incredibly versatile.

I’ve used it on my body in the shower and have also dribbled some into a running bath for some musky-sweet and spicy bubbles. As if we needed yet another Lush product that smells good enough to eat!

Cinders is definitely my favourite of the shower gels this year, there wasn’t a huge collection to choose from which was a little disappointing but both Sleepy and Cinders have impressed me enough to warrant buying an extra bottle for my shower gel stash.