The Blue Skies and Fluffy White Clouds Bath Bomb was first introduced to the Lush Community as one of the Harajuku, Japan store exclusives. It then went on to be an exclusive at Lush’s flagship store in Liverpool too. At the time of writing this review, it is now also available from Lush’s UK website and in selected UK stores.

Unfortunately, to make room for new products some have to eventually be discontinued. With Lush UK’s HQ now refusing to use their social media channels, it has made it very difficult to sort the fake news from the cold, hard facts BUT now that the ’30 years of the bath bomb’ celebrations are nearing an end, Blue Skies and Fluffy White Clouds is one of the bath bombs rumoured to be leaving.

If true, whether or not the Blue Skies and Fluffy White Clouds bath bomb will still remain in the Liverpool and Harajuku stores is another fact that has yet to be confirmed.

If you’re a frequent Lush customer you may recognise that there is also a Blue Skies and Fluffy White Clouds bubble bar.

The bubble bar equivalent of the Blue Skies and Fluffy White Clouds bath bomb (which for the purpose of this review I am now going to name just ‘Blue Skies’ to save us both a bit of time! 😉) is a staple Lush product. Available online and in stores all over the world, it is hugely popular. The introduction of a bath bomb that shares its same scent therefore sent a ripple of excitement through the Lush Community. 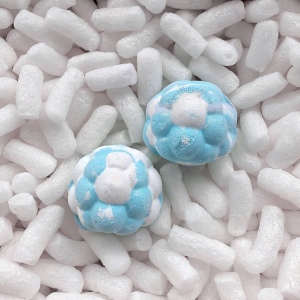 I find it really difficult to describe scents, the most prominent ingredient in the Blue Skies bath bomb just like its bubble bar equivalent is the patchouli. As a huge fan of both frankincense and cinnamon I am a little disappointed that my nose can’t detect either ingredient, if I had to describe the bath bombs scent with just one word I would choose peppery. 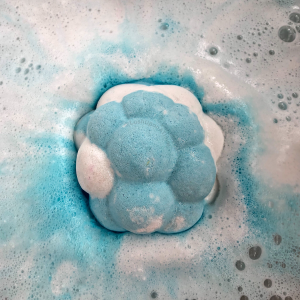 As soon as the Blue Skies bath bomb hits the water you are greeted with a gentle hiss, blue and white froth bursts out of the bath bomb as its peppery scent fills your bathroom.

Blue Skies much like the aforementioned The Comforter bath bomb is a very slow fizzer. Although the bath art wasn’t anything to write home about, I did get a few photos of the pretty bubbles that the bath bomb created as it slinked around my bath.

Even once Blue Skies is in the water my nose still cannot detect the frankincense and cinnamon leaf oil, my body does however feel the cinnamons skin warming properties. A good long soak in a Blue Skies bath left me feeling chilled out and my muscles completely relaxed.

I didn’t find the Blue Skies bath bomb particularly moisturising but my skin did appear brighter once I was out of the bath.

Pushing its scent aside, I do always feel completely relaxed after a Blue Skies bath. If you love the peppery Lush fragrances then I’d definitely recommend giving this bath bomb ago.