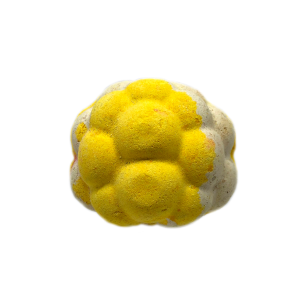 To look at you wouldn’t know that the Pop Art Bath Bomb is in fact a part of the Christmas 2019 line. The fact it’s not in-your-face Christmas is actually what first drew me to it. I imagine this would be the case for many others that aren’t quite ready to embrace the C word yet! 😉

Made in the same mould as the new Blackberry, The Comforter and the Blue Skies and Fluffy White Clouds bath bombs I was very excited to give it a try. 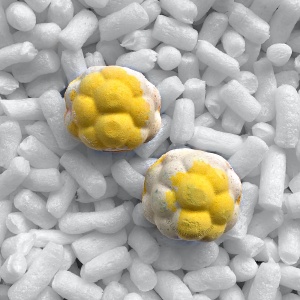 Pop Art is inspired by popcorn, a snack I can never get enough of. With its shape and its bright yellow and white colours it certainly stands out from all the other bath bombs currently available.

When it comes down to Pop Art’s scent family the Lush Community are divided on which Lush scent it is closest to. What with the shut down of Lush-UK’s social media too, it’s made it more difficult to get an official answer. 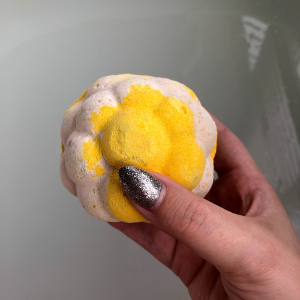 When the news of Pop Art was first leaked we all thought that its scent would be the same as the mouthwateringly scrumptious Let the Good Times Roll Fresh Cleanser; Since however using it I am leaning more towards it sharing its scent with the Yog Nog bath bomb.

It’s difficult to say which products scent it is supposed to emulate because of Pop Arts basic and incredibly vague ingredients list. I do however feel safe in saying that Pop Art’s scent is a fine mix of the 2 – just think of it like it is the baby of both the aforementioned bath bombs. 😉 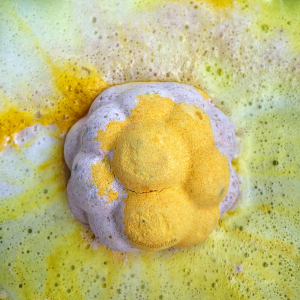 As soon as the Pop Art bath bomb hits the water you are greeted with a huge hiss, yellow and white foam fizzles out of it as it slowly bobs around the water surface. Once in the water it doesn’t take long for the hidden popping candy to kick in…

I don’t ever recall a bath bomb with quite as much popping candy before, Pop by name and pop by nature! Pop Art is a fabulously slow dissolver too, the popping candy cackled away for well over 5 minutes and hidden inside there is also burst of red colour too; Pop Art creates red, orange and yellow swirly bath art galore! 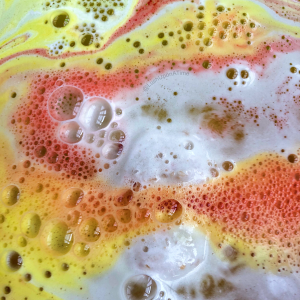 I am still undecided as to whether Pop Art is more Yog Nog scented than it is Let the Good Times Roll. I would however confidently say that if you do enjoy the Yog Nog bath bomb, you’d enjoy Pop Art. Think of it as a less oily version of the Yog Nog bath bomb, Pop Art doesn’t have the hidden bath melts in but does have plenty of popping candy!

Overall I am impressed with the Pop Art bath bomb, its caramel-sweet, pop corn fragrance although subtle stays on your skin long after getting out of the bath and it’s actually very hydrating on the skin too. I adore the popping candy aspect and was also blown away by the bath art it created.

One thought on “Pop Art Bath Bomb from Lush”