The Roller Bath Bomb was released back in February 2016 as an Oxford Street, Mother’s Day exclusive. My birthday is in February and in aid of it, I had booked to visit the flagship store as Oxford Street is quite literally the best Lush store in the universe.

I had, had a cheeky Synaesthesia treatment with all thanks to Lush and was eager to kill 2 birds with one stone by also doing a little bit of shopping after it, focusing on the Oxford Street exclusives from 2016’s Valentine’s and Mother’s Day range. Unfortunately the Roller bath bomb had been held back on its release and it was the only product I didn’t manage to get hold of that day.

I was born in London and had lived there for 24 years before moving to North Yorkshire for a quieter, better life.

If I had known about the flagship store opening almost directly opposite to where I once worked, I often wonder if I would have moved over 200 miles away? Luckily living so far away isn’t too much of a heartache as I have family and friends in London. My sister-in-law lives a short bus ride away from the flagship store and she goes above and beyond with her sister-in-law duties and picks me stuff up from there all the time. She’s a diamond, you should all be insanely jealous.

Of course while running my Lush errands she has also become a hardcore Lushie, which was inevitable as all Lush stores have a contagious atmosphere, especially Lush Oxford Street!

Although I was a bit late to the Roller bath bomb party as it had sold out almost as soon as it was restocked several times, I finally got hold of some of my own and I have honestly never experienced a bath bomb quite like it.

The Roller bath bomb is completely unique to any other Lush bath bomb I have had before.

It is actually part bath bomb, part bath melt. The top half of Roller is dipped in a waxy-like purple melt, while it’s bottom half is the standard bath-bomb-formula that we are all used to getting from Lush.

At first I wasn’t sure of the Roller bath bomb. It looked and smelt fantastic, I am however not a fan of any bath products that are too oily because I am not steady on my feet. I already require assistance to get in and out of the bath and don’t want to over-complicate things.

Roller is however in my opinion, the perfect balance of both bath bomb and bath melt. It’s formula always leaves my skin the softest it has ever felt, I also didn’t feel like an over oiled engine part as I had feared.

It’s as if my skin soaked up all of the Roller’s goodness, conditioning my skin into the best I have ever seen or felt it.

The Roller bath bomb shares it’s scent with the Yummy Mummy Shower Cream that was also released earlier this year for Mother’s Day, it was however not an Oxford Street exclusive as it was available everywhere for a short period. I hope they bring it back next year as it is perfection in shower cream form. If you’d like to read my review on it click the link above.

When the Roller bath bomb first hits the water it’s purple-melt-half floats just below the water surface, with it’s white side just above. it slowly froths up, spreading sweet and fruity scented foam around your bathtub.

It then slowly starts to spin, so that the purple side is now sometimes in vision. Slowly but surely the Roller bath bomb decorates your bath water with streaks of white, purple, blue, aqua green and pink swirls.

After some time the Roller bath bomb appears to break into two white pieces. Even though the Roller is now in half, it still carries on making the most gorgeous patterns of breathtaking colours.

I don’t normally include so many photographs in my Lush reviews but can you blame me for not wanting to miss a single moment of this precious bath bomb? 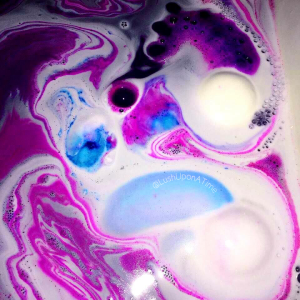 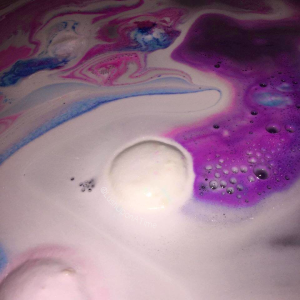 Whenever the Roller bath bomb becomes available to buy I strongly recommend you grab as many as you can. Actually scratch that… Don’t buy any at all, that way I can buy them all for myself!