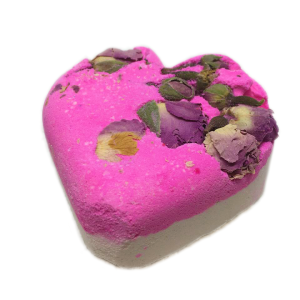 For Valentine’s 2018 Lush have revamped an old favourite, the Tisty Tosty Bath Bomb. Instead of being all white, it is now half white and half hot-pink. Visually, it is a huge improvement (in my opinion anyway…) if in doubt, just add some pink and voila!

Seeing as this version didn’t have the magic words, I decided to do a ‘Little Mermaid’ by picking out each rose bud saying, ‘he loves me, he loves me not…’ which I realise now was a bit pointless as each Tisty Tosty has 7 rose buds in. Spoiler alert, if you want it to end on he/she loves me then make sure you start with ‘he/she loves me’. It’s foolproof! 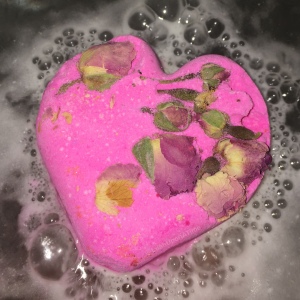 Tisty Tosty’s scent is all things rose. Sicilian lemon, geranium and jasmine oil are also in the mix adding a layer of musk to its already light and rosy fragrance. I like to pair Tisty Tosty with the Rose Jam shower gel to help carry the rose fragrance that little bit further. Upon hitting the bath water Tisty Tosty begins to hiss, bubbling away while rippling its fragrance through your bathroom. Tisty Tosty is an incredibly fast fizzer. It won’t win any prizes for bath art but the quicker the bath bomb dissolves, the quicker you can lie back into its relaxing waters.

I always end up using a product to help with dry skin alongside Tisty Tosty as it is quite a drying bath bomb. There are so many moisturising products you can pair it with. My favourites from this years Valentine’s line are the Tender is the Night naked shower cream and the Cherryish body scrub. Appearance wise I think 2018’s Tisty Tosty is a sight for sore eyes, it’s a great improvement. I however feel the lack of the paper note takes away a huge part of the Tisty Tosty’s character making it just another bath bomb.