The Pumpkin Bath Bomb was first released by Lush as a part of their 2016 Halloween line, when I heard the news that it would be making a return this year I was so pleased. Originally the Pumpkin bath bomb wasn’t the bath bomb I was most interested in from 2016’s Halloween range, its vanilla sweet and cinnamon spicy scent however won me over. I can never resist cinnamon! 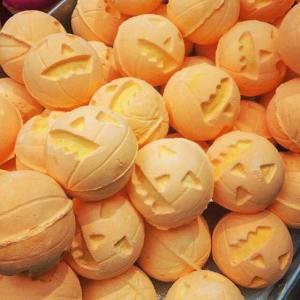 The Pumpkin bath bomb was actually the first I tried from the rather large loot of products I bought from the very first Lush Creative Showcase back in September 2016.

Upon first sniff the Pumpkin bath bomb really reminded me of the Yog Nog bath bomb from previous years. I thought maybe this was its substitute however it really isn’t at all related. The spice in both had me confused. Both are very warming bath bombs and Pumpkin’s warming elements is what first caught my interest, which is why it was one of the first I tried.

Suffering with chronic pain I am always on the look out for warm and relaxing products. I am so pleased that Lush brought not only the Pumpkin bath bomb back this year but also spoiled us with another spicy bath bomb, the Christmas Sweater.

The Pumpkin bath bomb is a very fast fizzer. I however did not mind this as the quicker it dissolves, the quicker I can lay back and soak up all of its relaxing and warm awesomeness. A lot of people have asked me on Instagram and on here about cutting up bath bombs to make them go further, for example halving the bomb so that you can get 2 baths out of it instead of 1.

For some bath bombs I think it would be a Lush crime to cut them up, the Pumpkin bath bomb is however one that I’d say you can split between 2 baths without taking anything away from how it performs, smells and how it affects you (essential oils wise) in the bath tub.

Overall I am very impressed with the Pumpkin bath bomb, it might not be as colourful as the other bath bombs currently available but the spiciness with in it has worked wonders on my aching muscles. I will without question be stocking up on these before Halloween has been and gone!

This post was originally posted on this website on the 27th of September 2016. I have been slowly updating each post on this blog as with time my photos have improved(ish) as has my product knowledge – Lulu @ Lush Upon A Time ♥

February 2021’s @lushkitchen subscription box! (Box 9) ✨📦💖
A big box full of the new-for-2021 @lush products from the Mother’s Day and Easter ranges this year.
Funfetti Cake Lip Scrub might just be the sweetest thing I have ever smelt 🍬🧁🍭🍰💋💕
Loving the Easter line from @lush this year, I’ll add an updated photo when I have it all 😅
Atom Heart Mother Bath Bomb in action 📸 ☁️💙✨
Atom Heart Mother Bath Bomb ☁️💙✨
Atom Heart Mother Bath Bomb ☁️💙✨
Celebrating Valentine’s Day with a Blow Me A Kiss bubble bath 💋 May your Sunday be full of love! ❤️
All aboard the Love Boat! 🛁✨
Love Boat Bath Bomb 🛁✨
A box of some of the @lush 2021 Mother’s Day line 😍💕
I’ve been so spoilt for my birthday this year 🥳💕✨🎉
I’m going to need a bucket or 4, full to the brim with Celebrate Body Milk please! 🤤✨🧡🎁
January 2021’s @lushkitchen subscription box! (Box 8) 📦💕
The Sleep Massage Bar smells so good and glides on to your skin like a dream! (No pun intended) 🤤
Seeing as the vote was 50/50 I uploaded BOTH of my Dragon Legend Bubble Stick edits, haha!🧡🐲✨❤️
I’m so in love with the Watermelon Sugar Lip Scrub, it does such an amazing job at exfoliating my lips...
Treated myself to a personalised ‘chopping board’... 😏 I see them on @notonthehighstreet and couldn’t resist! 🥰
Dragon Legend Bubble Stick 🧡🐲✨
I don’t think my skin has ever felt softer after using a bath bomb, I LOVE ME the Love Me Do Bath Bomb 🛁💖✨😏