For the longest time I didn’t give any attention to the The Olive Branch Shower Gel at all. Stupidly I just turned my nose up without even giving it a sniff, I see the word Olive and that was that. It wasn’t until I used the Lava Lamp bath bomb that I realised I had a soft spot for the products with orange flower absolute in.

Back when Lava Lamp was very first released (2015) it was an Oxford Street exclusive, after a few weeks it was unfortunately discontinued as it needed reformulating and I was heart broken. I went on a Lush mission and searched for alternative Lush products that also contained orange flower absolute. The first product that came up on the Lush website was the Pop In The Bath bubble bar. I quickly fell in love with Pop In The Bath’s scent, it’s not the same as the Lava Lamp bath bomb but it has a beautiful, delicate citrus scent that always leaves me wanting more.

The Olive Branch shower gel shares its scent with the Pop In The Bath bubble bar, as soon as I found this out I grabbed a bottle and I am now never without one.

Another thing that puts people off of the Olive Branch shower gel is the fact its ingredients separate in the bottle, this is not a sign of it going off, it’s just the olive oil in it collecting up at the top of the bottle, it’s simple science, all you have to do is give it a quick shake before use and it’s as good as new.

Once shaken the Olive Branch shower gel is a pastel orange colour, consistency wise the gel is quite runny, at first this annoyed me slightly but after I tried it a few times I realised that a little of it went a long way and that it lathered up a lot quicker than any other Lush shower gel that I have tried.

The olive oil in this shower gel is a real treat for your skin, the inclusion of it is why the shower gel is so watery. I can never get enough of it in the shower, especially in the Summer, it is perfect for this time of year. As described on Lush’s website using it really does make you feel like you’re chilling out and relaxing in the Mediterranean sunshine. 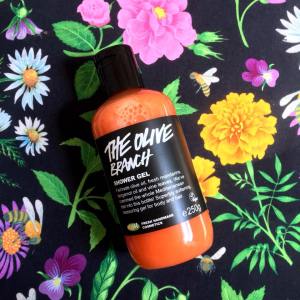 The Olive Branch shower gel went from being a product I never gave much thought on, to one of my all time favourites from first use. It works fantastically well as a shampoo too, I have really fine hair and sometimes conditioning it is a lost cause as it just makes it heavy and greasy straight away. My hair always washes great when I use The Olive Branch as a shampoo, at the same time as cleansing my hair it also keeps it well hydrated and conditioned. There’s no need for a conditioner and my hair looks and feels fabulous. The same goes for my skin when I use it just as a shower gel.

The Olive Branch is one of my all time favourite Lush scents, I have collected many different products that share its scent since first falling in love with it in 2015. I have the body lotion, the solid perfume and the, The Christmas Penguin bubble bar just to name a few.

The moral of the story is don’t let a products name put you off of even giving it a sniff, you could be pleasantly surprised!

4 thoughts on “The Olive Branch Shower Gel from Lush”