The Comforter Shower Cream shares its scent with the much loved, The Comforter bubble bar. When I first got into Lush I had no idea that Lush Cosmetics made their own unique scents, I didn’t even know that the most popular scents were used in several different product formats. This was the case until I one day see that the Twilight bath bomb had a shower gel equivalent. Once I learnt about Lush’s scent families my need to try everything grew out of control, hence this blog!

Much like the Yuzu and Cocoa shower cream, The Comforter is a gloriously thick and velvety formula. I hope that Lush decide to expand their collection of shower creams in the foreseeable future as the creams feel so much more luxurious on the skin in comparison to the shower gels. Not that I dislike Lush’s shower gels, the creams are just in my opinion that little bit more of a treat.

Just like the Bubble Bar of the same name, The Comforter shower cream is a vibrant, hot-pink colour. At first I wasn’t that sold on the shower cream’s scent. I thought it was a lot stronger than the bubble bar equivalent and I actually gave my first barely used bottle to my friend before I’d even given it a proper chance. 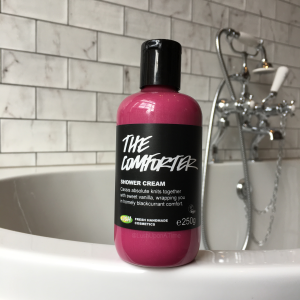 I love to join in on all of the Lush discussions on Instagram or Facebook and one day The Comforter shower cream was the topic of conversation. I mentioned that I adored the bubble bar but couldn’t get as excited about it when it came down to the shower cream because of how strong its scent was. A fellow Lushie told me to try it again, keeping in mind how lovely it will make my skin smell once I was out of the shower.

I therefore tried it again promising myself that I would give it more of a chance this  time, the scent was still stronger than the bubble bar but I realised it wasn’t an offensive strong. Once the shower cream was mixed in with the hot shower water I actually see (or should I say smelt) the shower cream in a whole new light.

Just like the Yuzu and Cocoa shower cream, The Comforter’s scent remains on your skin all day, it’s a very gentle scent on your skin and one that I have grown to love. The Comforter has as the name suggests a very comforting scent, packed with cassis absolute and blackberry infusion it’s BERRY nice. (Sorry, I couldn’t resist…)

The cassis and blackberry ingredients alongside the vanilla and bergamot is what makes the scent of this shower cream so very inviting. Washing with it really is like being wrapped up in a warm and snuggly hug. The Comforter shower cream also contains almond oil which is a bonus if your skin is in need of some extra hydration. The shower creams are always my go to when my skin needs a little bit of extra TLC.

Another thing I feel is worth mentioning before I finish this review is that a little of the product goes a very long way, (if you’re not as gluttonous with it as my husband is anyway.)

The Comforter shower cream lasts well beyond its shelf life too, after 6 months plus it will need a bit of a shake in between uses because the ingredients in it will naturally begin to separate but after a quick shake, it goes back to it being as good as new.

I am so glad that I was convinced to try this product out again as I really like it now. I am always looking for new Comforter scented products to add to my ever growing collection. I hope they bring back the solid perfume again soon as I bitterly regret not picking one of them up when they were available.

7 thoughts on “The Comforter Shower Cream from Lush”