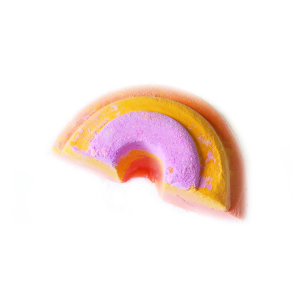 I finally got hold of the Lush Oxford Street exclusive, the Somewhere Over the Rainbow Bath Bomb. A huge thank you to my sister-in-law Kelly for picking these up for me. I literally squealed with delight when this handsome little bath bomb arrived on my doorstep. When I very first see the sneak peaks of this bath bomb, I predicted that it would be similar to the Sacred Lotus bath bomb in terms of fragility. Somewhere Over the Rainbow is however the complete opposite of fragile. For its unusual shape, it is remarkably sturdy putting other oddly shaped bath bombs to shame.

I’m 100% positive that Somewhere Over the Rainbow shares its scent with another Lush product, I however can’t work it out and it’s driving me insane! – I wish that I could have them all in front of me to sniff so that I could work it out. I found a little bit of information about it online but seeing as it’s a very newly released bath bomb no one has had the chance to write a proper review on it just yet. 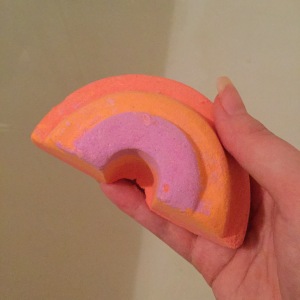 Containing sicilian mandarin and neroli oil it is a relaxing, mood boosting and refreshing bath time treat. Many people think that bath bombs are only good for winding down before bed. WRONG! The Somewhere Over the Rainbow bath bomb breathes life into my tired body, helping me go on for that little bit longer.

As soon as Somewhere Over The Rainbow hits the water you’re greeted with a thick pastel coloured red and orange foam that is super moisturising and soft. Unless you’ve been living under a rock you’d already know that the Somewhere Over The Rainbow bath bomb is inspired by the film The Wizard of Oz, It’s kaleidoscope of colours really does draw you into the magic that comes if you follow the yellow brick road. 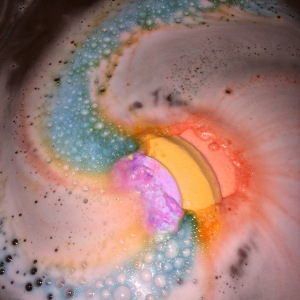 I always get an unbelievable amount of photos when I use this bath bomb. I thought that it would be a quick fizzer with the odd splash of colour, it was however so much more than that. It fizzed away very slowly, gracefully filling my bathroom with a soft citrus and calming neroli scent. This combination works a trick for shaking off any worries or stress you may be feeling.

I am devastated that I only have one more of these bath bombs left in my own personal stash, they were an Easter 2016 limited edition release so you can no longer get them. I feel that once Easter 2016 was over, the absence of the Somewhere Over the Rainbow bath bomb left a big empty hole in the Lush world. It’s a brilliant product and would make for a fantastic permanent edition, I’d love it even if Lush just decided to keep it on as a Lush Oxford Street exclusive.

3 thoughts on “Somewhere Over The Rainbow Bath Bomb from Lush”