The Mother Earth Bath Bomb is the first of the recent, larger sized seasonal exclusives that I have actually bought. At the Lush Showcase 2016, I demoed the larger versions of Dragon’s Egg and Intergalactic, the Mother of Dragons Egg and Nebula bath bomb.

Although both were fantastic (videos and photos can be found if you scroll through to September 2016 on my Instagram feed) I didn’t really see the point of getting them as they were exactly the same except for their size. Limited edition yes, however, I had a wedding to save for back then so decided against getting them, which I of course regret.

At the Lush Summit 2017, Lush introduced us to yet another giant sized product, the Mother Earth bath bomb. Scent and appearance wise, Mother Earth is just a larger version of the World Piece bath bomb. (A play on the words piece and peace, not a grammatical error!) Unlike the previous larger bath bombs released, Mother Earth is actually slightly different to its smaller version, how it differs remains a secret until it is placed in the water…

After seeing photographs on Instagram of the amazing bath art that the Mother Earth bath bomb creates, I knew I needed to get hold of at least one to use myself. When describing Mother Earth’s scent, the first word that springs to mind is refreshing. Its primary scent is mostly peppermint based, it however has a zingy, citrus fruit element to it, this unique blend of ingredients dampens the peppermint aspect in Mother Earth ever so slightly, although it still has a fantastically refreshing scent, the mint in it isn’t as sharp, making it more gentle on the nose.

At first I wasn’t sure if I liked its blend of unique ingredients, before Lush I’d never experienced anything minty that wasn’t on its own or at a push, mixed with chocolate. I however felt exactly the same when I first tried another minty bath bomb, the Abombinaball, which happens to now be one of my favourite Lush products.

Discovering that mint goes with so much more than just chocolate is another thing I have to thank Lush for. 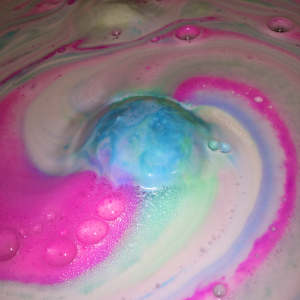 With the Mother Earth bath bomb being so big it’s a very, very slow fizzer. I didn’t time mine but at a guess I’d say it took just over 20 minutes to fully dissolve. Being a slow burner, Mother Earth gives you more than enough time to appreciate the bath art it creates. The device I use to take photos of bath art actually ran out of power as I couldn’t stop snapping away at all of the beautiful colours and patterns it created.

I haven’t included all of the shots I got as we’d be here all day… What makes Mother Earth different from its smaller version World Piece is that it has a pink middle. This is probably why I fell in love with it so much. If in doubt, just add pink!

The pretty colours; Pink, blue and green that spurt out of this bath bomb more than entertained me, I love a bath bomb that I don’t get bored of half way through, especially one that lasts so very long! No other bath bomb has ever held my attention span quite like this one.

It wasn’t until I got out of the bath that I realised how this product benefited my skin. My skin has never looked or felt better, I’m not sure whether this is down to its huge size, many bath bombs make my skin feel fabulous none however have topped the effects of Mother Earth. This bath bomb has to be one of my favourites from the list of new for 2017 products. The purple bath water it leaves you with is such a beautiful shade, unfortunately Mother Earth was a part of this years (2017) Mothers Day line so isn’t available anymore. I am really upset with myself for not picking up a few more of these while I could! 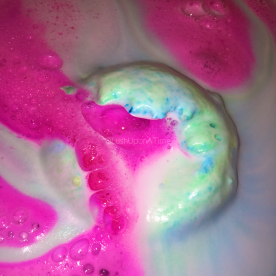