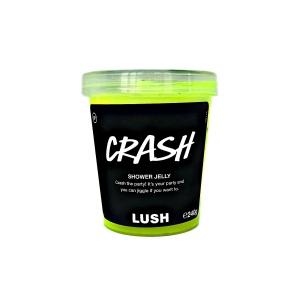 Back in March 2019 I first got to experience the delightful Crash Shower Jelly on the opening day of Lush’s new flagship store in Liverpool. Sadly we could only admire it on that day as it was unavailable to purchase. I know a few lucky people however managed to get a pot or 2. I was bitterly jealous of course. 😉

Before now to be able to buy a pot you had to book an in store party. I finally managed to get hold of a large pot when I visited Lush Liverpool this July, it is still an in store party exclusive but as far as I am aware, Liverpool now sell it exclusively too.

Crash shower jelly shares its scent with all of the Lush products from the ‘Celebrate’ scent family. I throw the favourite word around a lot when it comes down to Lush but when it’s a product that is Celebrate scented I need every item available and in multiples.

I’d go as far as to say that the scent of the Crash shower jelly is my signature scent, I first experienced the Celebrate scent the first time I used the Golden Wonder bath bomb and I have been in love with the fragrance ever since.

You’ll be correct in saying that Lush have previously released a shower jelly in the same scent that Crash has, its name is Snowshowers. Apart from the obvious colour difference I didn’t immediately see any other differences between the 2 shower jellies. This has annoyed some long term customers but for me, seeing as it is a scent I love so much I don’t mind a reincarnation of it.

Crash isn’t the only shower jelly to have been rebranded this year either. Rumba shower jelly is another to have a new name and look. I’m not sure why Lush have rebranded them both but as a fan of both scent families, I am not complaining!

Crash’s ingredients list includes; sweet orange, lime and cognac oils. I personally can only really smell the sweet orange and lime from the pot, once in the shower the cognac oil does however reveal itself adding a warmth to the lather that I appreciate on a colder morning.

There are so many ways to use a shower jelly, I prefer to use mine in the same way as you would a bar of soap, whole. Some people however chop their shower jellies up using a few pieces at a time. With the Crash shower jelly being slightly more fragile-a-jelly (something Snowshowers wasn’t) the chopping method is in my opinion the best way to get the most out of this particular shower jelly.

Overall I am very impressed with Crash. Yes, it is very similar to Snowshowers but as I mentioned earlier slightly more fragile, not a great characteristic but not bad enough to put me off of it completely, one pot has seen me through 14 showers so far and there’s still plenty left.

It is also a lot more hydrating on my skin than Snowshowers is. It lathers easier and the colour is just as bright as the likes of the Ectoplasm shower cream. I think it’s a wonderful addition to Lush’s shower jelly family and I am looking forward to further Celebrate scented product releases. 🤞 Lush if you’re reading this I really need a new Celebrate perfume to be released very soon, please and thank you! 😉