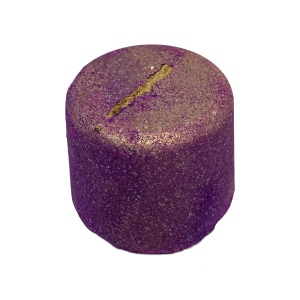 The Phoenix Rising Bath Bomb was one of the very first that I tried from Lush. Back in the day when Lush Cosmetics wasn’t all that I ever thought/talked about, Phoenix Rising was readily available in every store as well as online. This was the case up until early 2015.

Since Phoenix Rising’s retirement this is the first time (to my belief) that they have been released as a Lush Kitchen product. Their scent is to die for, I missed it a hell of a lot since it was discontinued so I decided to order a few.

As soon as they arrived I was greeted with their wonderful scent, it took me right back to when I very first got into Lush.

I always liked this bath bomb as it wasn’t like any of the others. Anything with bergamot oil in, is a winner for me but when it is mixed with cinnamon it becomes a dream. Its purple exterior and gold lustre soon fill the bath, a beautiful deep pink foam froths off of it as it glides around in the shimmering, deep purple water.

Phoenix Rising then sinks to the bottom. Still bubbling away, whilst filling my bathroom with an uplifting and energising bergamot and cinnamon scent. The cinnamon stick then becomes unattached to the bath bomb as the ‘phoenix rises!’ right back to the top.

There is something so incredibly warming about cinnamon, I wish Lush did more of them as there’s nothing like a good old soak in a cinnamon infused bath.

Sometimes I find that bath bombs dissolve too quickly. When this happens it leaves me with no time to appreciate what a very clever invention they are.

The Phoenix Rising bath bomb is however a very slow fizzer. Its colour, scent and presence soothes the soul.

The scent from this enchanting bath bomb lingers on your skin for the best part of the next day if used just before bed, I also love how it pampers my skin. It feels silky smooth when I get out of the bath, there is no need for me to moisturise at all.

I’m still very sad that this bath bomb was put into retirement, I would however like to thank Lush Kitchen for making up a small batch last week so that we could get the chance to relive it once more.