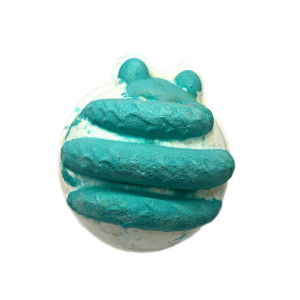 Originally the Tengri Bath Bomb started out as a Harajuku store exclusive. It however became available from Lush’s UK website in early 2020. It has a brand new scent that reminds me of a mixture of the Dragon’s Egg and April Showers bath bombs, it’s beautifully uplifting.

I don’t know much on the inspiration or story behind the Tengri bath bomb but it represents a dragon. Although you have to look at it very close to make the dragon out; The blue bit is the dragon, spiralled around the white bit of the bath bomb. It almost looks like a boa constrictor getting ready for its lunch.

They oddly all work brilliantly together, I like that it’s a product with lavender oil in that doesn’t make you sleepy. Just one sniff of Tengri leaves you feeling refreshed and energised, something I’m not used to when lavender is involved!

As soon as the Tengri bath bomb comes into contact with the bath water it begins to hiss away, sending white foam and light blue bubbles across the waters surface.

A burst of lemon-and-violet-fragrance starts to fill the room. The Tengri bath bomb begins to spin, fizzing away rather quickly. I’d have liked it to be around for a little longer but the quicker it dissolves, the quicker you can lay back, take a deep breath and relax. 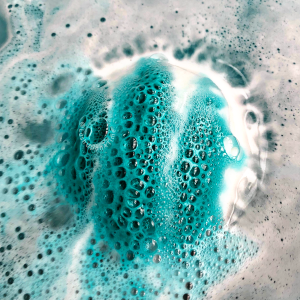 When I first used the Tengri bath bomb I had no idea that its insides were purple. What I thought was going to be a simple display of blue and white bubbles soon became blue, white and purple.

I personally wouldn’t have minded a little more bath art from the Tengri bath bomb although the scent and silky soft bath water that it left behind well made up for the lack of it. My skin felt just as soft when I got out of the bath and its light and refreshing scent stayed with me for the best part of the rest of the day too.

My skin feels super-soft and hydrated after using Tengri, it gives you just the right level of hydration too, I am not left feeling at all oily. It’s perfect.

My favourite thing about the Tengri bath bomb is that it’s a lavender product that puts a spring in your step instead of making you sleepy. I have really enjoyed Tengri’s scent and I hope that Lush decide to use it in other product formats in the future.

One thought on “Tengri Bath Bomb from Lush”