I know that upon the release of the pink Tisty Tosty Bath Bomb some thought it was a bit of a cop out from Lush, after all, the original version of it in white is available all year through.

The pink version was first released back in 2016 as a part of the Valentine’s range that was exclusive to Lush’s flagship Oxford Street store.

Unfortunately every time I visited the flagship store during the Valentine period I seemed to have missed it. Luckily, Lush Kitchen however released a small batch and I managed to pick up a few from there.

I am very ashamed to admit that until the release of the pink Tisty Tosty I hadn’t actually ever tried the white Tisty Tosty, it was just never in my local store and it had been long forgotten about in amongst all of the other bath bombs such as Fizzbanger, Blackberry and Twilight. I’m naughty and still haven’t reviewed the original Tisty Tosty yet… I do however like it and I promise to get my review of it up sometime next month. The white version often appears in a lot of the Valentine’s Day gift sets which I am super excited about. 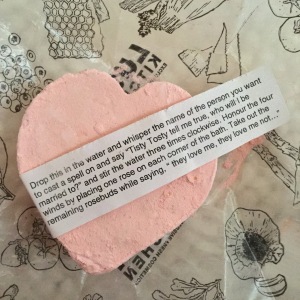 I guess I should tell you a little bit more about the story behind the Tisty Tosty. Its ingredients are inspired by a love potion from a very long time ago, the medieval times to be exact. Don’t worry, this isn’t going to turn into a history lesson, as interesting as I find medieval history, I know 99.9% of the people that are reading this just want to know about the BathBomb…

Above is a photograph of the pink bath bombs paper insert. It says;

‘Drop this in the water and whisper the name of the person you want to cast a spell on and say, “Tisty Tosty tell me true, who will I be married to?” and stir the water three times clockwise. Honour the four winds by placing one rose on each corner of the bath. Take out the remaining rosebuds while saying, “they love me, they love me not…”‘

I’m not sure if anyone has been lucky in love since using this but I do know that it made for an interesting bath time!

The pink Tisty Tosty bath bomb has a strong rose scent that pairs perfectly with the Roses all the Way Soap. It is quite a quick fizzer which isn’t always a bad thing, especially if you just want to get your relax on.

It’s no Yoga bath bomb and doesn’t put on much of a show colour wise. The water does however turns a pale pink which happens to be my favourite colour.

Some people prefer the bright and bold bath bombs while others favour the softer ones such as the Tisty Tosty. Overall I do like this bath bomb, in particular the story behind it. It isn’t as moisturising as other Lush bath bombs though, I recommend using it with a Butterball bath bomb just because I don’t like my skin to get too dry.