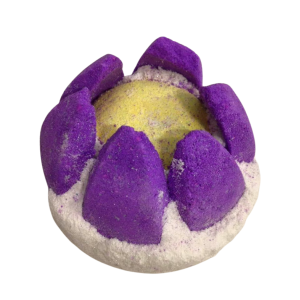 I have been waiting to try out this bath bomb ever since it was released as a Lush, Oxford Street exclusive, it has a design like no other bath bomb. It resembles the shape and appearance of a lotus flower, its uniqueness makes it one of the more attractive, exciting and greatly anticipated products that were created exclusively for the Oxford Street, grand opening collection.

In colour it is white and yellow with purple upright petals; Often described as ‘star-shaped’ the Sacred Lotus is a very pretty product. Unfortunately the shape of the bath bomb leaves it vulnerable. I still haven’t managed to transport one from Oxford Street to my home in North Yorkshire safely. I’m hoping that should Lush decide the bath bombs vulnerable shape is a fault, that the idea of a redesign outshines the choice to discontinuing it as they did the easily breakable Granny Takes A Dip bath bomb earlier this year (2015). 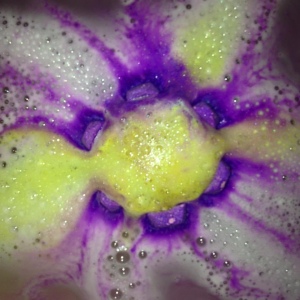 The Sacred Lotus Bath Bomb has neroli oil, jasmine and tonka absolute in. When I finally made it to Oxford Street and I had a big pile of them in front of me all I could really smell was the jasmine. I was completely oblivious to the neroli oil within it. I had expected the Sacred Lotus to have a very strong scent it was however quite the opposite, very gentle.

When I very first used the Sacred Lotus bath bomb it wasn’t until it was half way through its show, fizzing away in my bath water that I realised its scent had so much more depth to it. All of a sudden I was hit with a wave of fruityness and I realised that it  also had neroli oil in.

Neroli is one of my favourite essential oils as it not only smells beautiful but it has been scientifically proven to increase the production of serotonin levels in the brain, a.k.a the happy hormone.

Apart from its delicacy, Sacred Lotus is a very enjoyable bath bomb. A real sacred lotus is an aquatic plant, similar to a lily pad and it is found in India. I like how the bath bomb resembles this in use. 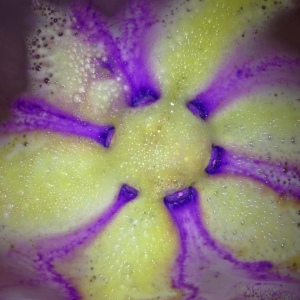 Jasmine absolute is a very popular ingredient throughout India too. It therefore made perfect sense for Lush to pair the jasmine ingredient in with the Sacred Lotus bath bomb.

Upon hitting the water Sacred Lotus begins to fizz, leaving a trail of white, purple and yellow foam. During the bath bombs reaction with the water near the end, the purple petals break off going off on their own little journey of purple fizz.

Sacred Lotus is a truly unique Lush bath bomb that every Lushie has to experience in the flesh at least once, it isn’t until you see a bath bomb like this in action that you appreciate how much work goes into each and every Lush product.